The first trip to live up to the name of our blog; after our Egypt adventure we took a detour to see the World Expo in Dubai! The six month long Expo was to open in October, 2020, (but, COVID!) so was postponed for a year, with an October 1, 2021 opening instead. We were not aware of the Expo until we read about it on the Senior Nomads Facebook group and realized how easy it would be to pop over to Dubai from Cairo. In fact, route options for Cairo-Dubai-Madrid were far more attractive than what was available for Cairo-Madrid (our planned route which only seemed to have middle of the night departure times), plus this detour only increased our flight costs by about $300/each. FYI – Emirates Airlines (which is an outstanding airline by the way) includes a free single entry World Expo ticket with every flight to Dubai (if you’re not flying with Emirates, single-day Expo tickets are 95 AED ($33 CAD / $28 US, and seniors – anyone 60+ – are eligible for free entry to the Expo).

I knew nothing about the UAE, so you get to learn along with me! Bordering the southern coast of the Persian Gulf, prehistoric settlements dating between 5000 to 3000 BCE have been found, along with evidence of even earlier inhabitants. The local tribes were prosperous traders between 2600 to 2000 BCE and with increasing knowledge of water management, including development of irrigation systems, tribal settlements grew along the coast and into the interior countryside (2000 to 1300 BCE). As Islam spread throughout the area, beginning in 600 CE, the region again emerged as an important trading center, in particular for pepper and other spices. In the 16th century, the Portuguese arrived and managed to wrest control of the spice trade away from Arabs, dominating the ports along the southern Gulf coast for more than a hundred years. The British followed. Years of skirmishes between the local tribes (sheikdoms/emirates) and the British, who were endeavouring to protect their Indian trade routes, ultimately resulted in seven sheikdoms agreeing to ally themselves with the British (the General Maritime Treaty of 1820) and the Trucial States were established. In 1892, the Exclusive Agreement Treaty was signed which in effect made the Trucial States a British protectorate. During much of the 19th and early 20th centuries, the pearling industry was an economic mainstay of the Trucial States, however, with the advent of the Japanese cultured pearl (which was center stage at several World’s Fairs in the 20s and 30s) pearl trade in the Persian Gulf was effectively wiped out by the end of WWII. Then, in 1958, the first commercial oil was discovered at Abu Dhabi. By the 1960s the financial burden of protecting this region became too much for the British government, and in 1971 the seven Arab emirates of Abu Dhabi, Ajman, Dubai, Fujairah, Ras Al Khaimah, Sharjah and Umm Al Quwain formed a union, independent of Britain – the United Arab Emirates.

Today, only about 12% of the UAE’s population of nearly 10 million are Emirati citizens; the vast majority are expats with Indians leading the way at 28% of the population (given the high number of expats, English was universally spoken).  And while wealth is clearly on display in the major centers of Abu Dhabi and Dubai, most Emiratis live outside these urban areas and, contrary to popular opinion, are NOT rich; one article I read estimates that the top 1% of Emirati citizens in the UAE hold more than 50% of the country’s wealth!

Dollars – When we first thought about doing a detour to Dubai we really wondered whether we could afford it, and much to our surprise, it didn’t break the bank. After quite a bit of internet searching, Howard found the Mercure Dubai Barsha Heights Hotel Apartments on the Red Line tram line and we lucked into a deal on Booking.com – $88 CAD/night (normally the rooms are closer to $200/night). New hotel construction seems to be continuous and most of the booking sites offer hotel deals, you just need to take some time to find them. Our total expenses for 4-nights in Dubai were $835 Canadian, which averaged out to $208/day ($167 USD / 147 €), most of which was accommodation and food – restaurants were definitely pricey.

Our other main expenses were:

Out and About – Other than the Expo, the only “touristy” thing we paid for was to take in the view at the Palm Jumeirah, one of the three artificial islands on the Dubai coast. We tried to get tickets to go up to the 125th floor of the Burj Khalifa, the tallest structure in the world (829.8m/ 2,722ft, just over half a mile) but the booking website would not accept PayPal nor either of our credit cards (you could take your chances and try to get a ticket at the door, but it is normally sold out in advance) so we settled for the 52 story view at the Palm (tickets are 100 AED / $35 CAD). As it turned out, the smog that day was so severe the view from the Burj Khalifa would have been significantly diminished. 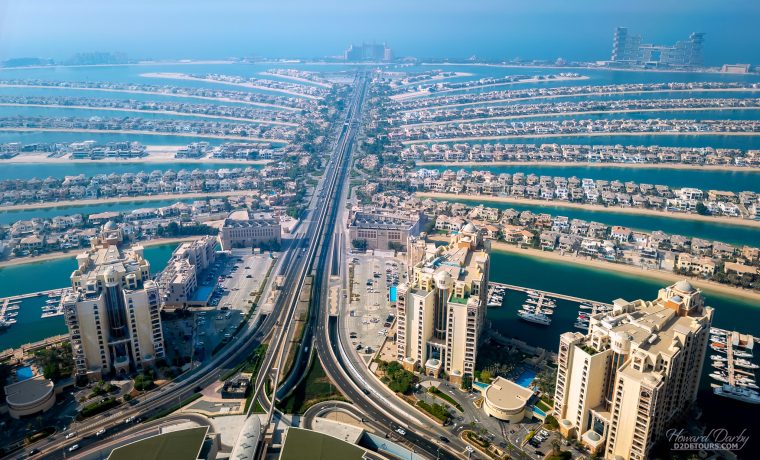 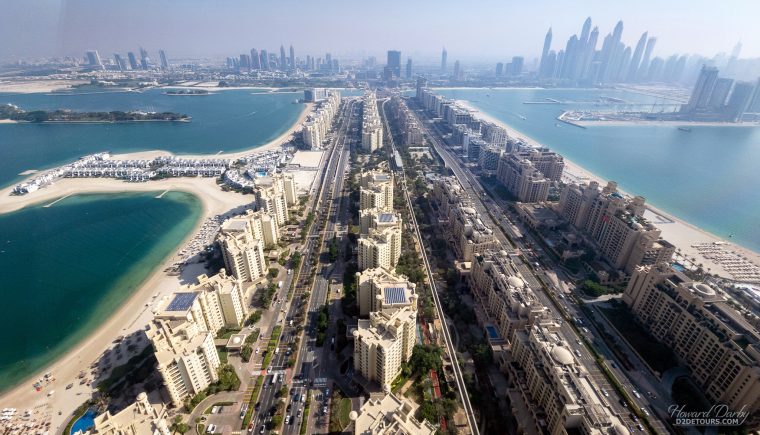 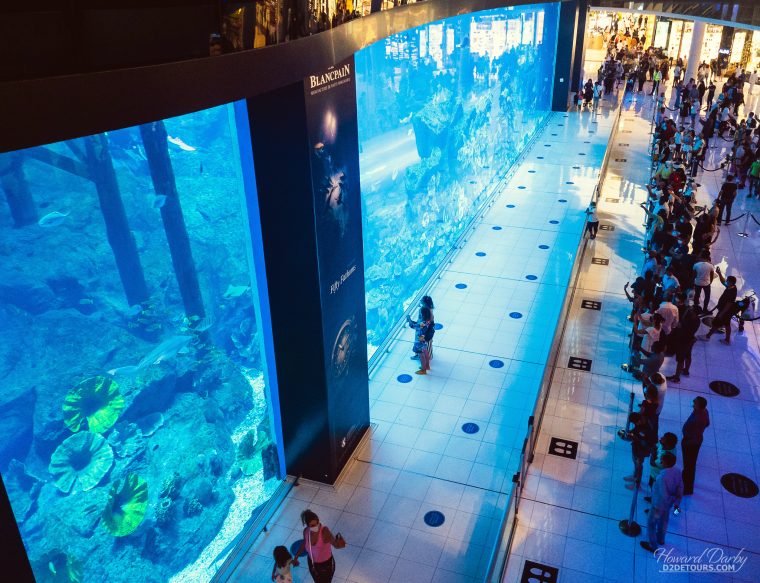 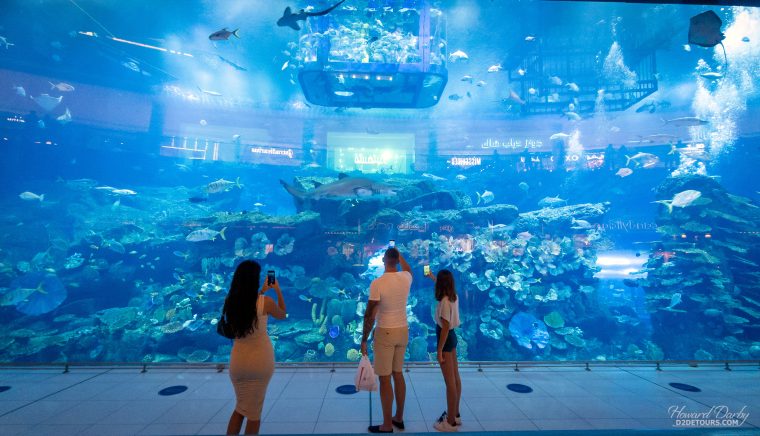 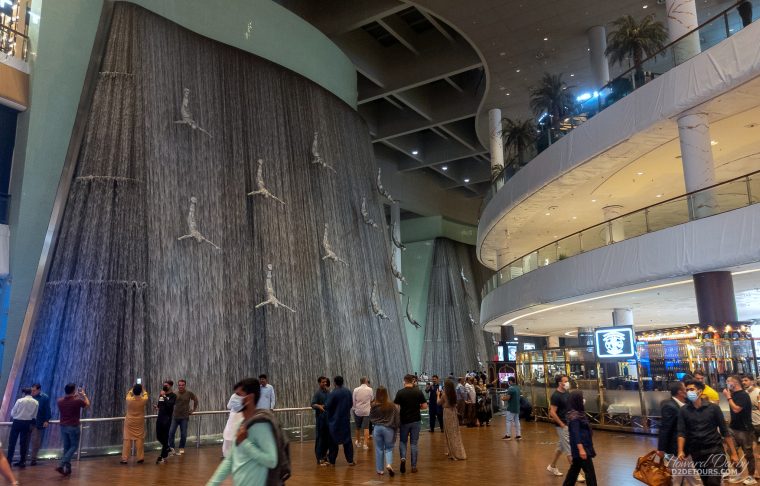 The main impetus for our detour to Dubai was the Expo, which we thoroughly enjoyed. The first World’s Fair (or Expo as they have become commonly known) was held in Prague in 1791. The character of these events has evolved over time. Originally they focused on trade and pioneering techniques. Over time the focus moved away from technology to cultural and social awareness and by the 1980s were becoming more nationalistic, though not in a negative way almost like nation-branding. Each country, at their own expense, builds their pavilion and they are quite a mix of modest (Cambodia) and extravagant (UAE) structures. We had been to the 1986 World Expo in Vancouver, Howard’s home town, so it was fun to again experience an Expo atmosphere. 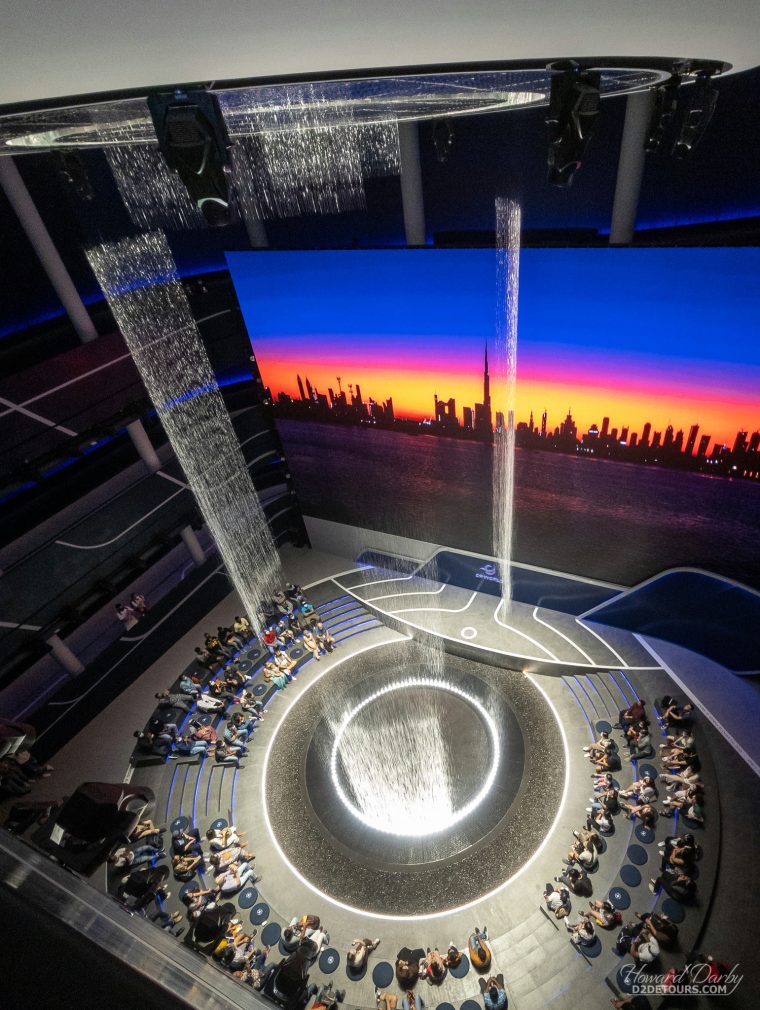 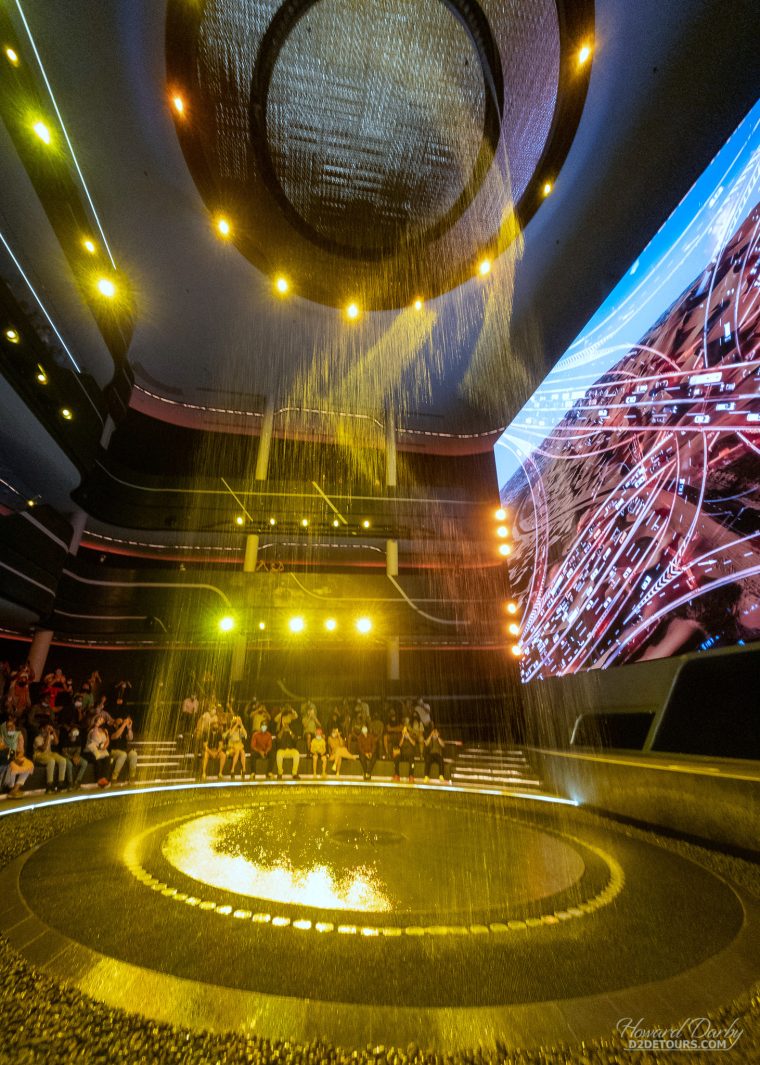 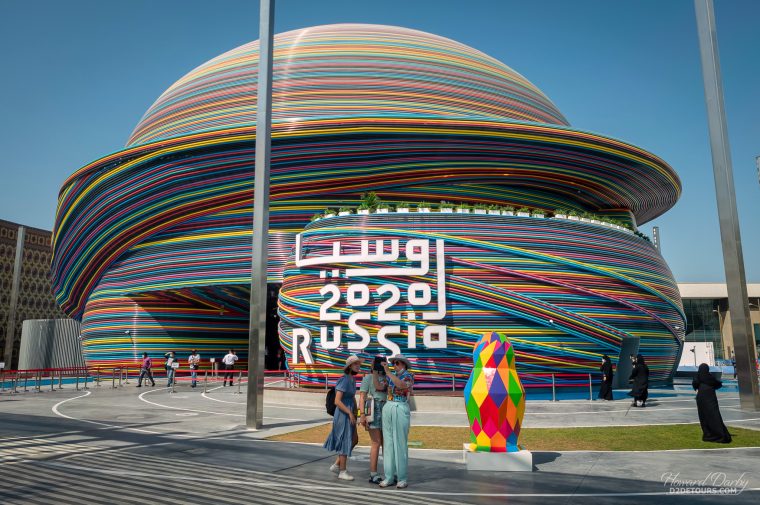 The theme for the Dubai Expo is “Connecting Minds, Creating the Future” and it was interesting to see the various interpretations. Forget IMAX and 3D films – the best way to watch a movie is flat on your back, nestled in a beanbag, with a curved floor to ceiling screen (Korea Pavilion). Just a few other highlights (for us) were the water walls between the Al Wasl Plaza and Jubilee Park, the Al Wasl Plaza at night, the solar trees in the Sustainability Pavilion and just the general architecture of the pavilions – very cool!! 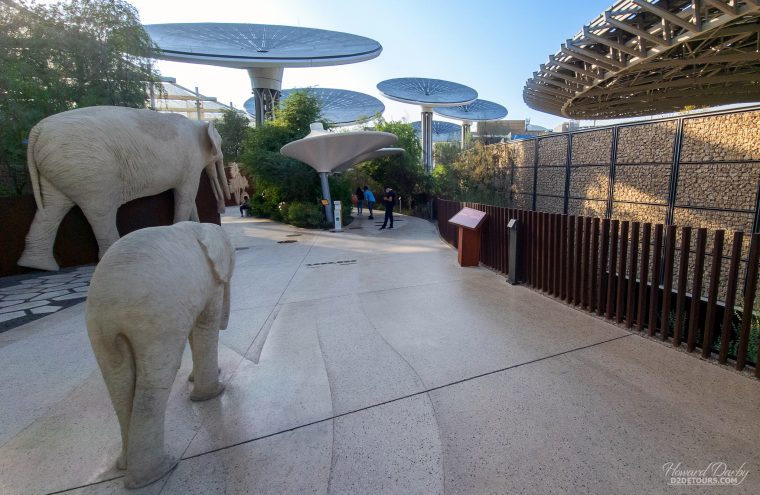 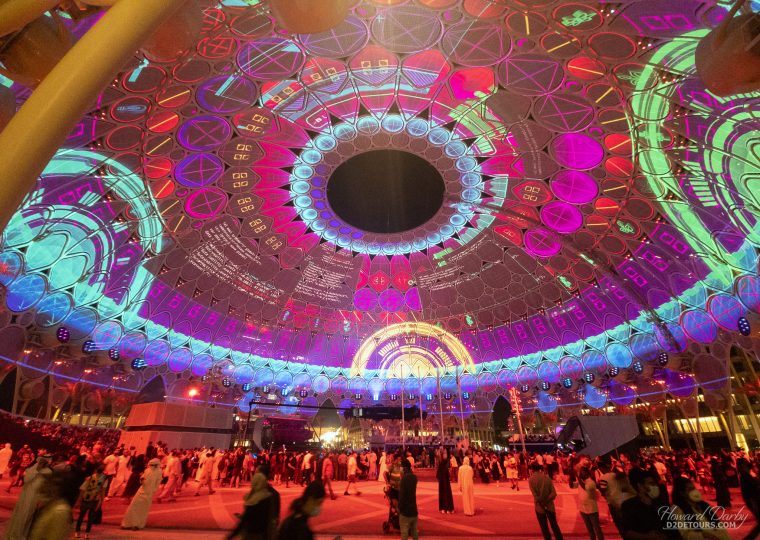 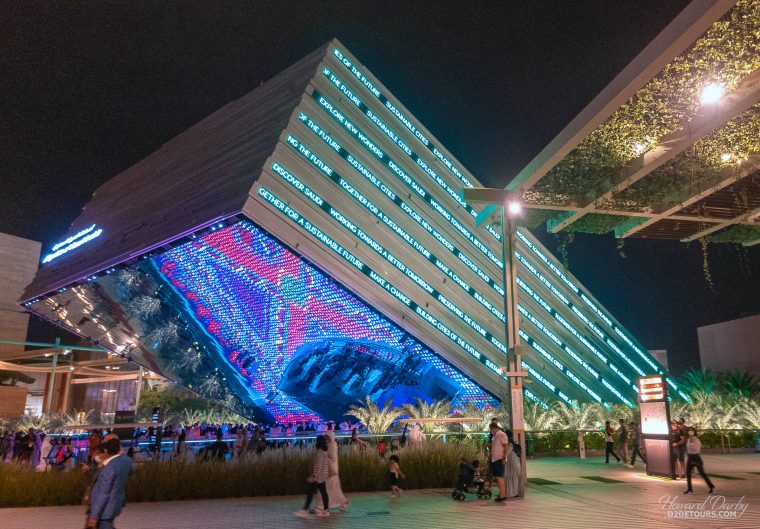 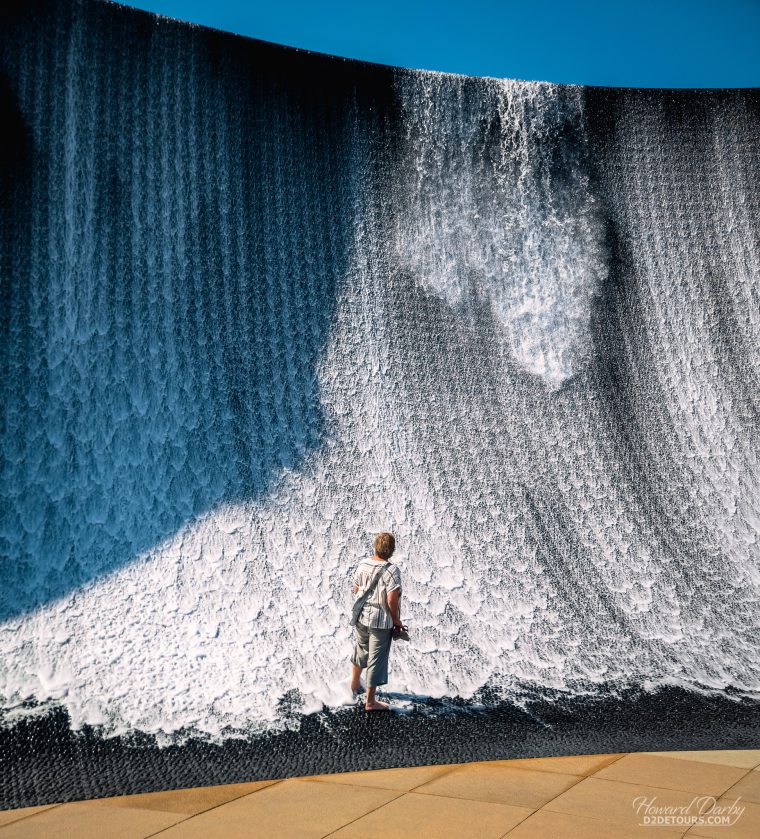 We were at the Expo on Halloween (October 31st) and were treated to a spectacular, one-night only, rock opera in the Dubai Millennium Amphitheatre – there are a variety of performances scheduled in this amphitheatre throughout the duration of the Expo and they all sound amazing!

Little insider tip, keep your eyes open for beanbag chair areas sprinkled around the Expo grounds. The bags were large enough for two people to sit down together and rest your weary feet – we found some in a shaded, sunken alcove next to the Portugal Pavilion, and also in the lovely grassy area pictured here:

Getting to the Expo site was super easy with Dubai’s tram system. The main line, the Red Line, extends for 67kms – from roughly the airport all the way to the Expo site – and is the most economical (and convenient) way to traverse the city. We preloaded regular NOL cards (nol is Arabic for fare) at the ticket booth at the airport station (with some assistance from the ticket agent who was very helpful in explaining how much we should put on our cards as fares are dependent on the length of travel). If you were to travel the entire length of the line a single fare is 6.50 AED ($2.25 CAD); each of our fares for the tram trips we took were 4.50 AED ($1.50 CAD). Just a quick note, there is a GOLD car, which is usually at the front of the tram that is more spacious with nicer seating, however the fares are about twice as high and require a gold NOL card. The trams were generally very busy but without fail, various gentlemen would offer up their seat to me (not sure whether that meant I looked elderly or frail) but which was very kind and something I have rarely seen in Canada.

Us (our thoughts on the area) – Dubai isn’t a destination I would tell people, you “must” visit – it struck me as fairly artificial (think Vegas or even Disneyland). It does have some compelling architecture, was extremely clean, yet had incredible smog, and seemed mostly to be glitz and glam with no real substance. I had wondered whether we would stick out as tourists (or worse, feel like paupers amidst all the wealth) but didn’t feel that way at all – everyone appeared to either be a tourist or part of the workforce! That being said, because we were “in the area” I’m really glad we had the chance to experience it for ourselves.

One thought on “Dubai World Expo – Without Breaking the Bank!”