We wrapped up our 2021 travels by leaving the Costa Blanca on a 4-day road trip inland, wending our way past rocky outcrops dotted with windmills and castles before finishing in Madrid for our flight back to Canada for Christmas.

Just under an hour northwest of El Campello, where we spent the previous month, is the 12th century Castillo de la Atalaya or Castillo de Villena (Castle of the Watch). FYI, if you are using Google Maps for directions to the Castle, be aware that Google took this literally and provided directions which bypassed the parking lot and ticket office, instead taking us up a very narrow stone roadway on the south-side of the hill which ended at a sunken courtyard in front of the Castle. Howard executed a flawless 3-point turn and got us back to the bottom where some very helpful locals directed us to the proper entrance on the north side (Plaza de las Embajadas). This fortress is not overly large but has been nicely restored, including the chemin-de-ronde (the walkway connecting the watchtowers) and was worth the 3€ ($4.30 CAD) entrance fee, which is one of the less expensive castle tours in Spain. 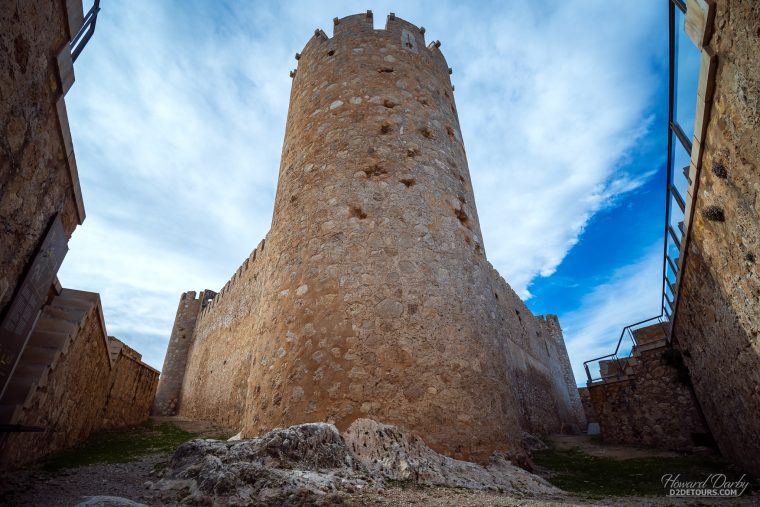 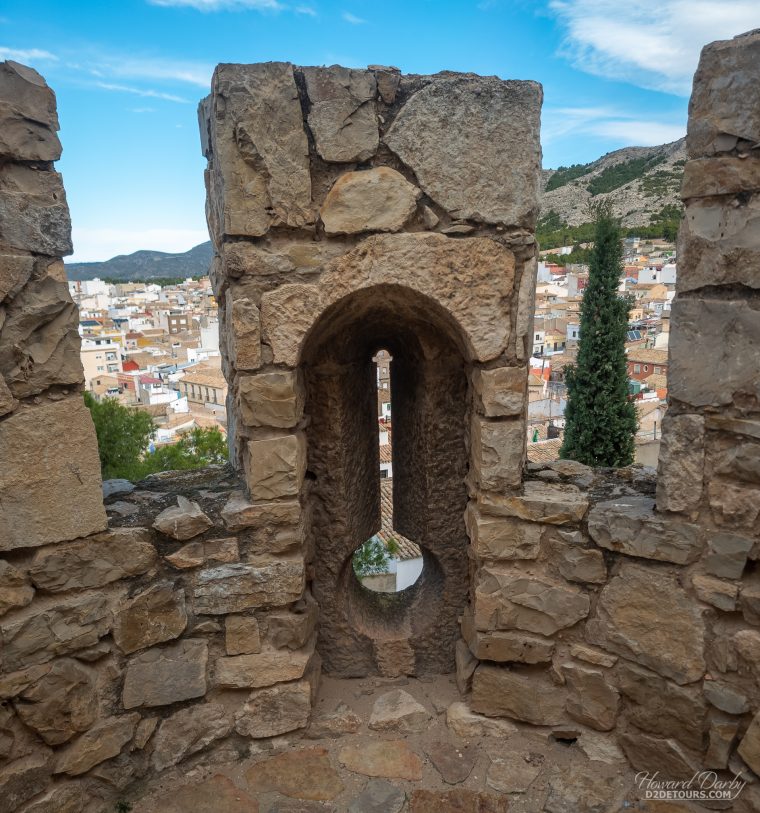 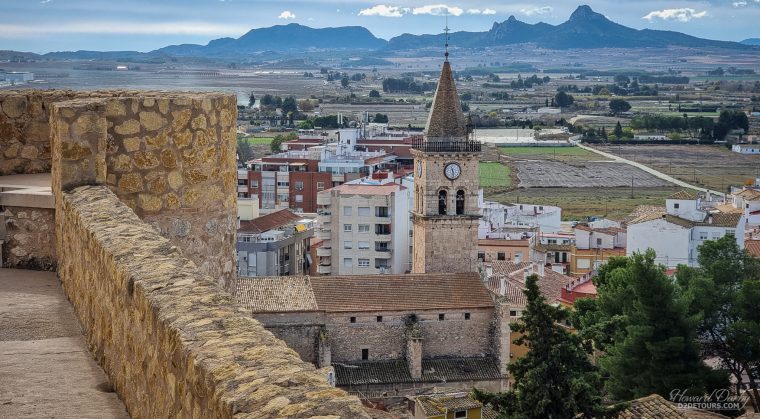 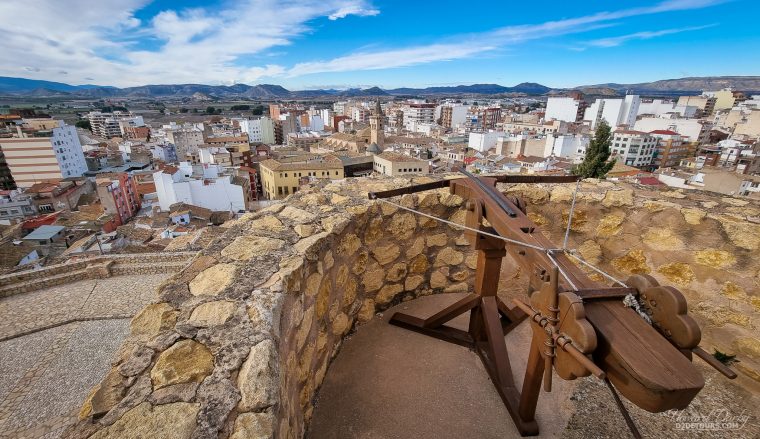 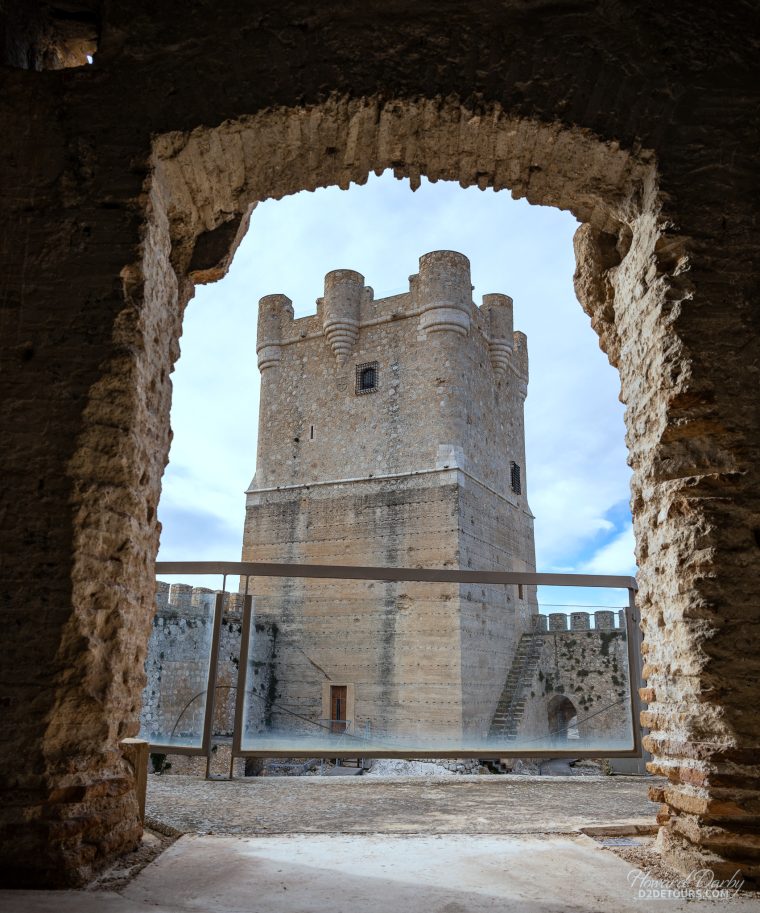 From Villena we drove to the City of Alcázar de San Juan where we stayed in an enormous one-bedroom Airbnb which worked well as a base to explore the area. In case you were wondering, the term Alcázar, which is used throughout Spain, is a Moorish term for fortress or palace.

An hour north of Alcázar de San Juan is the City of Toledo whose historic center was designated a UNESCO World Heritage site in 1986. Strategically situated on a hill above the Tagus River, Toledo’s history spans 2000 years. It has been a Roman municipality, capital of the Visigoth kingdom following the Roman Empire’s demise, a Muslim stronghold, a Christian outpost, a significant source of revenue during the reign of Charles V and in 1936 was the site of one of the most noteworthy events of the Spanish Civil War (1936-1939), all of which have left their mark on the architecture and culture of the City. I wish we had allowed ourselves more time in Toledo to take in all of the stunning architecture but we needed to fit PCR testing into our schedule and spent more time than we expected in the Alcázar de Toledo museum. Billed as the Army Museum it neatly weaves the history of Spain within its military displays and is free on Sundays or 5€ ($7.25 CAD) Tuesday through Saturday (closed on Mondays). Built during the reign of Charles V (16th century), over time the Alcázar grew to symbolize the strength and superiority of Spain. During the early stages of the Spanish Civil War, both factions saw the propagandic value of it, which led to a 69-day siege by the Republican army on the Nationalist held fortress, with the Nationalist army holding firm. The Alcázar was heavily damaged and there is a very interesting room in the museum devoted to the siege and the War.

Roman ruins were not on my radar during our visit to Toledo, but funnily enough as we were walking to the lab for PCR testing we passed Escolar Park and noticed stone walls that looked suspiciously like the remains of a Roman circus and sure enough they were! Some effort has been made to unearth this huge structure – 423 meters (1,388 feet) long and 100 meters (330 feet) wide – but really it is just rubble, although it gives you some insight into what a mammoth task archaeological excavation (and restoration) is. It’s a pretty green space and there is good signage explaining the site, if you are interested and find yourself outside the walls of the old town. 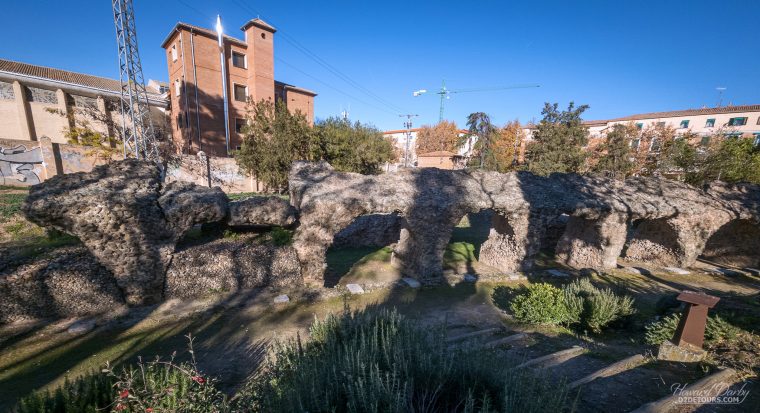 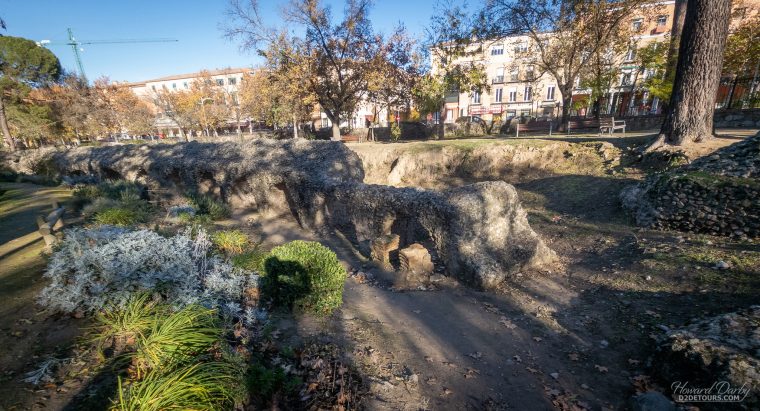 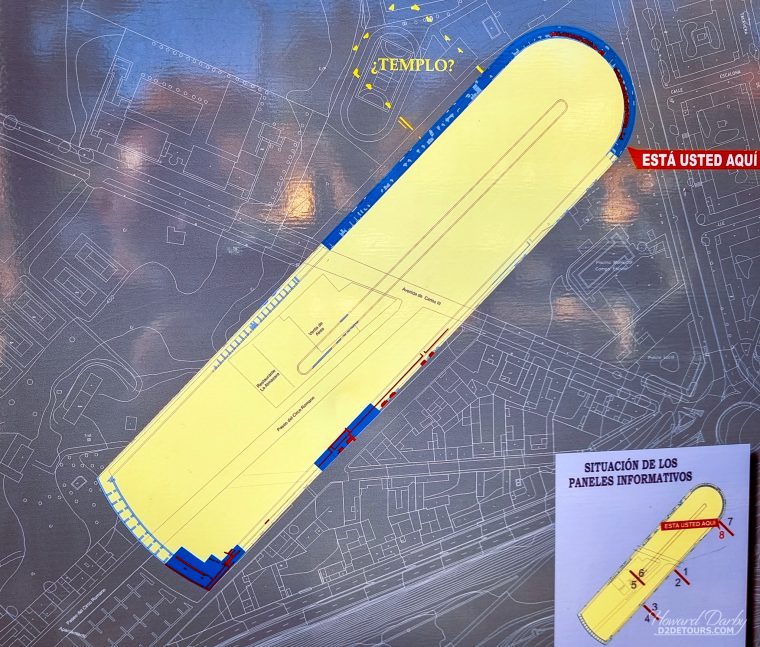 By the way, as Toledo was founded on a hill, as it grew construction fanned out into the countryside below, so if you venture outside the City walls, it’s all downhill (though not in a bad way!). To make the climb back up to the old town a little less onerous the City has installed a series of escalators! The Remonte Mecánico de Recaredo runs from the Puerta de Bisagra to the Puerta del Cambrón and a second one, the Remonte Mecánico de SaFont, is not far from the train station – brilliant idea!

Before we left Toledo, we walked past the Catedral Primada. Built over the course of 250 years it is a beautiful building showcasing a mix of Gothic and Mudéjar architecture. We were in Toledo in early December and there was a small Christmas fair in the plaza in front of the Church.. 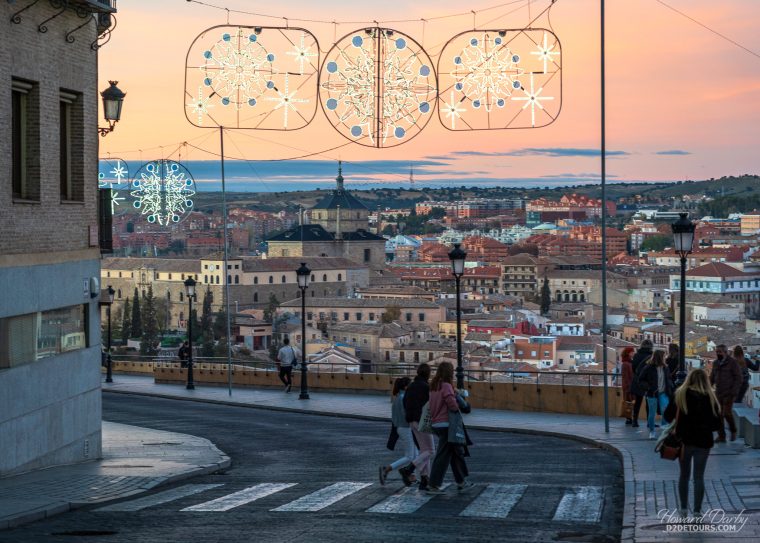 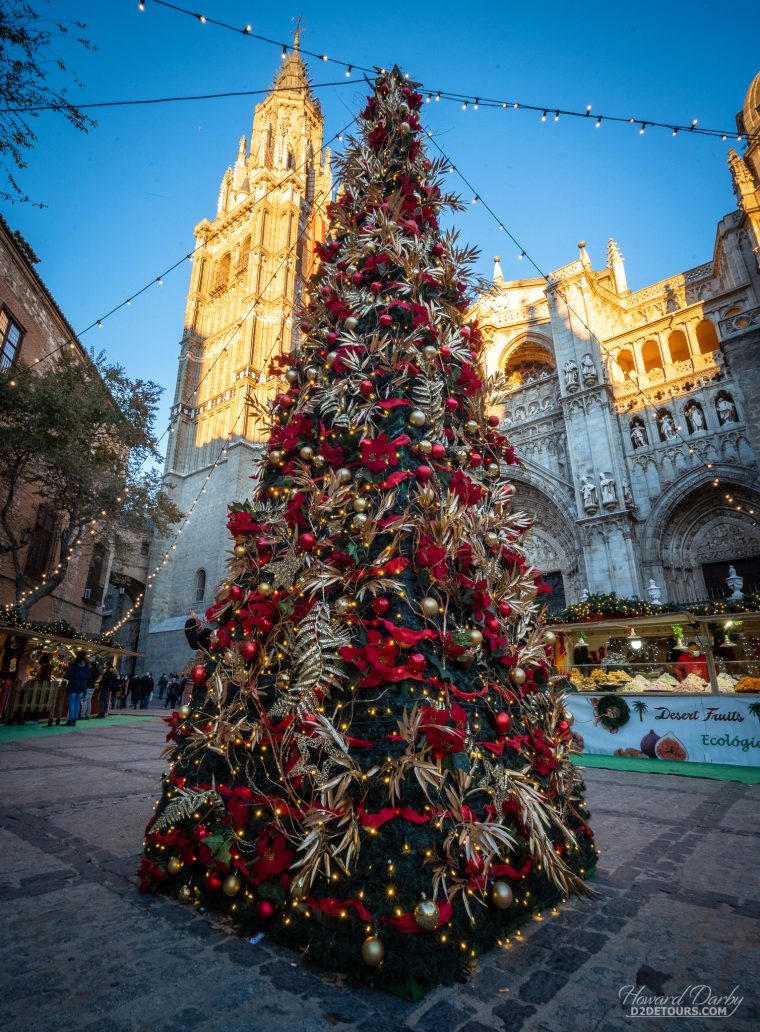 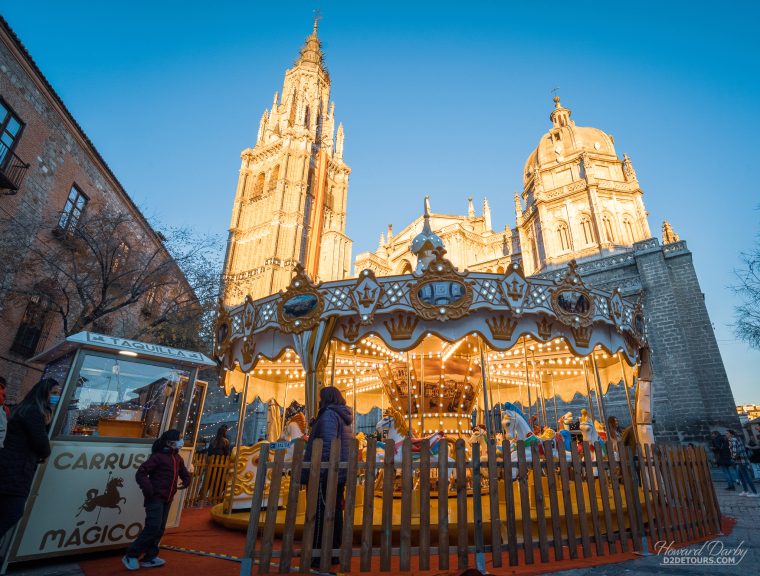 In the mid-16th century, windmills were introduced in the Castilla-La Mancha region as a high-tech alternative to water mills for grinding grain. Though no longer in operation, many of them have been lovely restored and are sprinkled throughout the area.  Roughly 40 kilometers west of Alcázar de San Juan on the Cerro Calderico ridge above the town of Consuegra are twelve gleaming white windmills which served as the inspiration for Don Quixote’s battle with giants in Miguel de Cervantes 17th century novel. As a teenager one of my favourite pieces to play on the piano (accompanied by my off-key lyrics) was The Impossible Dream from the Broadway musical, Man of La Mancha, so it was fun to walk amongst these iconic structures and hum quietly to myself. 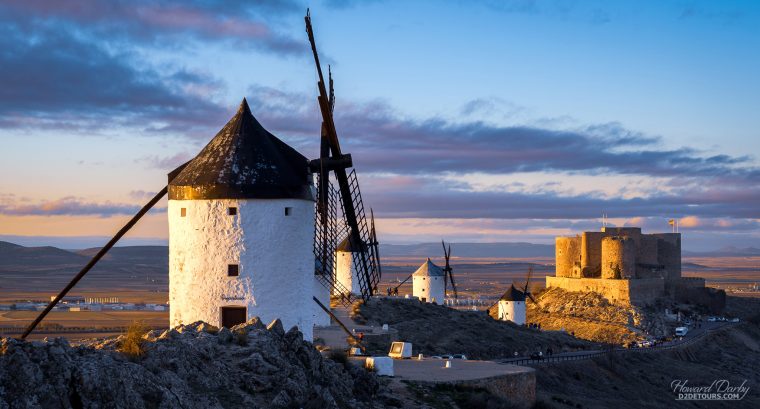 We had trouble finding reasonably priced accommodation in Madrid, so opted to only stay for the night before our flight to Canada. Perhaps another time we’ll have the opportunity to fully explore the City but on this trip we settled for just visiting the Museum of the Americas. The museum houses a fascinating collection of artifacts “acquired” during Spain’s extensive campaigns through South and Central America and up the Pacific Northwest coast. While we were disappointed that the signage was only in Spanish, we could at least decipher dates and locations on the exhibits, and overall the museum gave us a greater understanding of Spain’s history of exploration. Entry to the museum is free on Sundays or 3€ ($4.30 CAD) otherwise, and despite the lack of English translations was a great way to spend an afternoon. 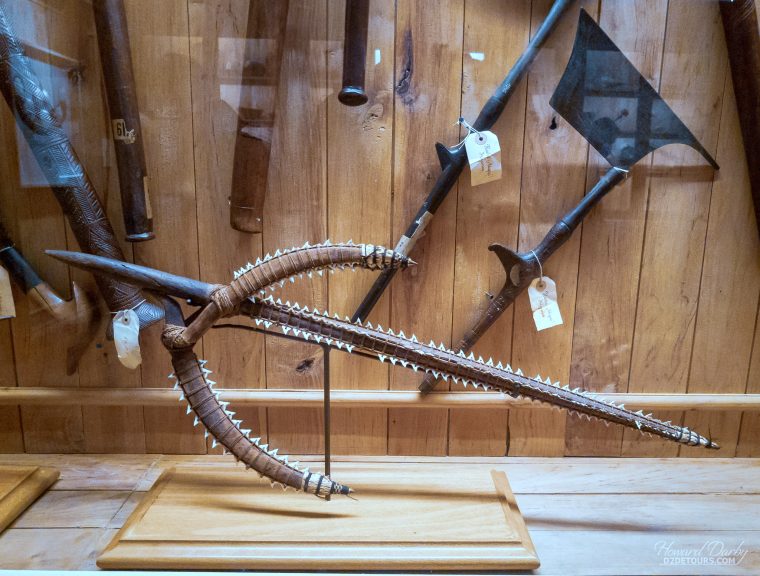 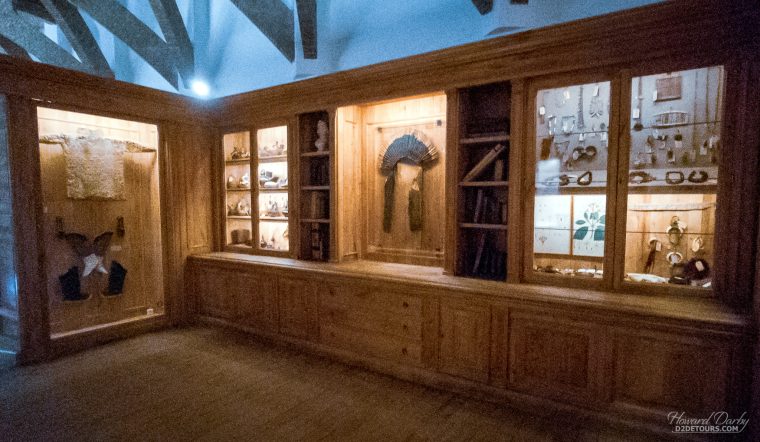 We traded the mild temperatures in Spain for the bitter cold of a Canadian winter (-34°C/-29°F) and spent Christmas with our family. These past 4½ months roaming through Europe and the Middle East have solidified our retirement plan and now that we are back in Canada we’ll begin the process of selling our house and transitioning into a full-time nomadic lifestyle. Between selling the house, hopefully finally getting to go on our Tanzania safari that was postponed from February, 2021, and a few other personal commitments, we plan to be back on the road in early June, 2022 and hope you will continue to follow our adventures. 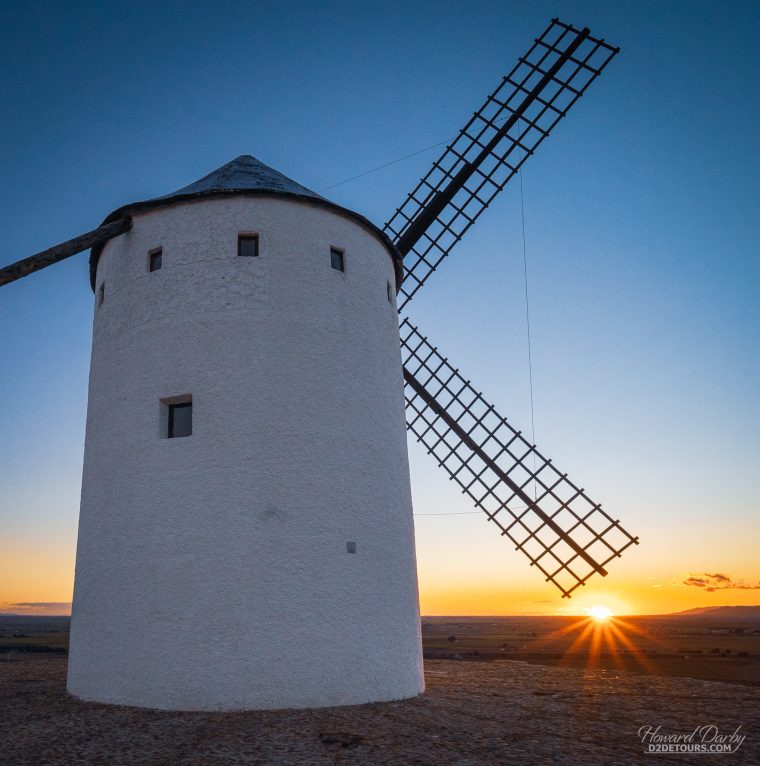 One thought on “Castles & Windmills: A Road Trip Through Southeastern Spain”