Road Trip: Dubrovnik and the Heel of Italy

After 66 nights outside the Schengen Zone (see our Italy to Hungary post for Schengen rules), we headed back to spend the balance of the year (mid-October to Christmas) in Italy, Malta, Spain and Portugal.

We averaged $191/day Canadian ($140 USD / €141) for this leg of our travels (1 night in Dubrovnik, the overnight ferry between Dubrovnik, Croatia and Bari, Italy, 4 nights in L’Assunta and one night in Reggio Calabria). The overnight car ferry was not expensive considering we had a private room, and with a 9-hour crossing it was worth every penny to stretch out on bunk beds, which were surprisingly comfortable.

The bathrooms, however, were shared and I got lost every time I went – it was a bit of a labyrinth down in the belly of the ship and every corridor looked the same!

Boarding the ferry was an experience. Firstly, your online ticket is not a boarding pass. Mid-afternoon on the day of departure you must check-in at the Jadrolinija office, several blocks from the ferry port, in order to obtain your boarding pass.

Then you start lining up at the port about three hours before boarding, which seemed like a ridiculous amount of time to allot for boarding but then we discovered why – every vehicle, including semi-trucks, BACKS into the ferry hold – it was not a quick process.

Croatia is not yet part of the Schengen Zone (they will be as of 2023) so we needed to pass through customs/immigration too. Fortunately, as inefficient as their system appears it obviously works as we left on time. I do find it incredibly odd that no one was checking boarding passes until the moment before you drive into the ferry hold so if you hadn’t read your online reservation correctly and didn’t “check-in” earlier, would you be turned away??

We have been to Dubrovnik before (as a port of call on a 2014 cruise) and in spite of only being a 2.5 hour drive from Montenegro (where we’d spent the last 9 days, so we could have easily driven straight to the ferry port on departure day), we decided to spend a little extra time in Dubrovnik taking in the old town during the late afternoon and evening, in addition to seeing a bit of the surrounding area.

We found a great, inexpensive hotel room ($46/night CAD) that was outside the old town but within easy walking distance of a bus stop where we could catch a bus right to the Pile Gate (single ride bus tickets were KN15 / $2.60 CAD). On our first visit to Dubrovnik we’d been with our teen-aged sons who were only moderately interested in wandering the streets (plus it was August and 38°C / 100°F) so this time we enjoyed exploring more of the back alleys of the old town. 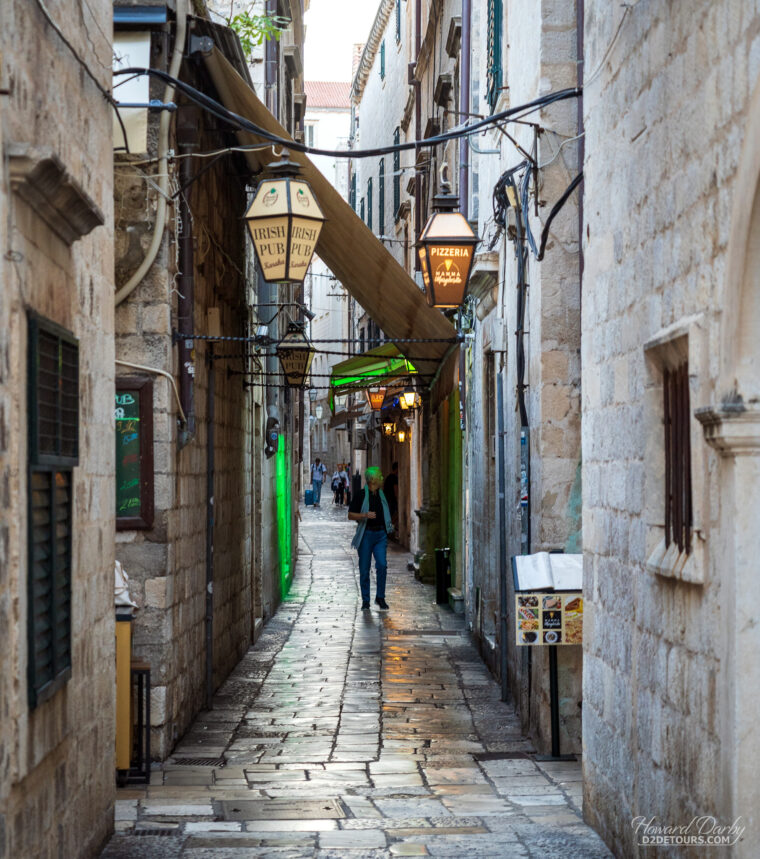 Dubrovnik is quite different from the other fortified Venetian towns along the Adriatic coast, likely because it’s not really Venetian!

The Venetians invaded this part of Croatia in the mid-13th century, only to lose all of the Croatian coastline to the Hungarian Kingdom under the Treaty of Zadar (1358). While the Venetians ultimately regained control over most of the Dalmatia coast, the peninsula where the Republic of Dubrovnik (and the port of Dubrovnik) were situated was happy to stay under the suzerainty of Hungary as the Hungarians paid little attention to this coastal holding. As a result, the Republic conducted themselves as if they were a free, independent state, exporting their own natural resources (salt, wine, oil and fish) through the port of Dubrovnik, and profiting nicely as the access point to the Mediterranean for the Balkan states of Serbia and Bosnia. The trade-off for having little oversight from Hungary was that the Republic needed to protect itself from the ever-present threat of the Venetians, and the footprint of the walls surrounding the town of Dubrovnik today date from the 14th century. 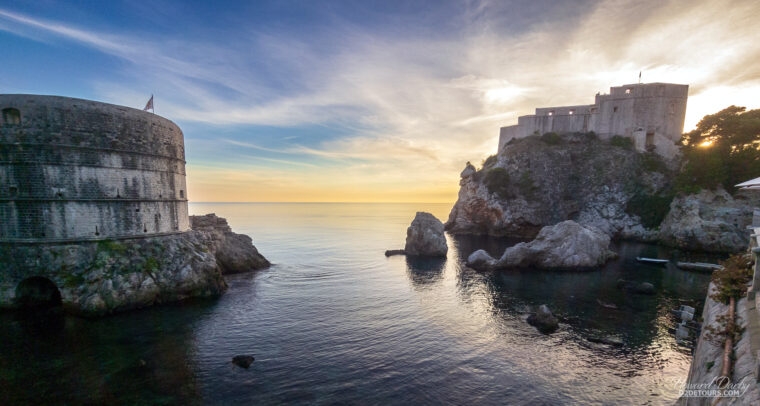 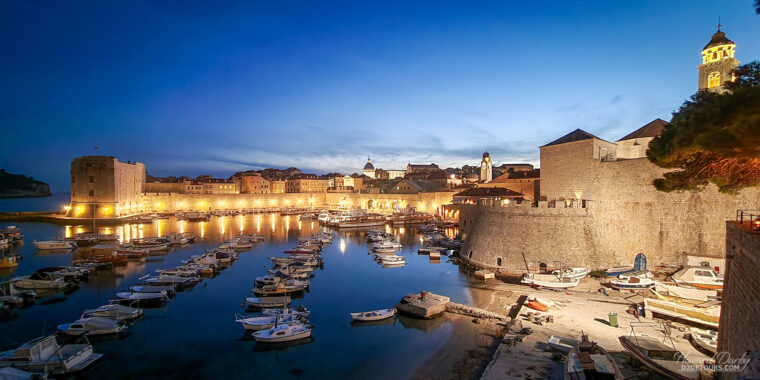 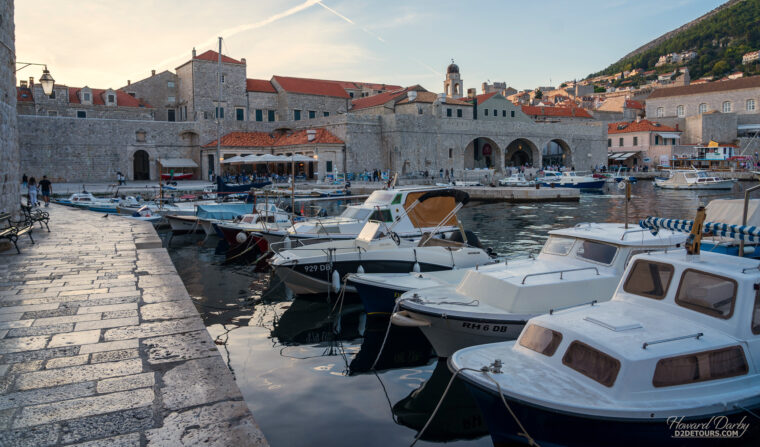 The other fortified Venetian towns we’ve visited (Zadar and Kotor) are quite compact. Not so in Dubrovnik, it feels grand with wide main streets, expansive squares and impressive gates.

Roughly an hour north of the city of Dubrovnik are the sister towns of Ston and Mali (Little) Ston. Despite lucrative shellfish (oysters) and salt resources, in the early 14th century the Bosnian Kingdom sold these holdings to the Republic of Dubrovnik when the Bosnian King needed a quick influx of cash. The Republic recognized the need to protect these new assets and using the walls of Dubrovnik as a guide, it fortified the two towns, although the land being protected here was significantly larger – the original length of the walls was 7 kilometres (4.3 miles)! Over the years earthquakes have destroyed sections of the walls so that today only 5.5 kilometres (3.4 miles) remain accessible. 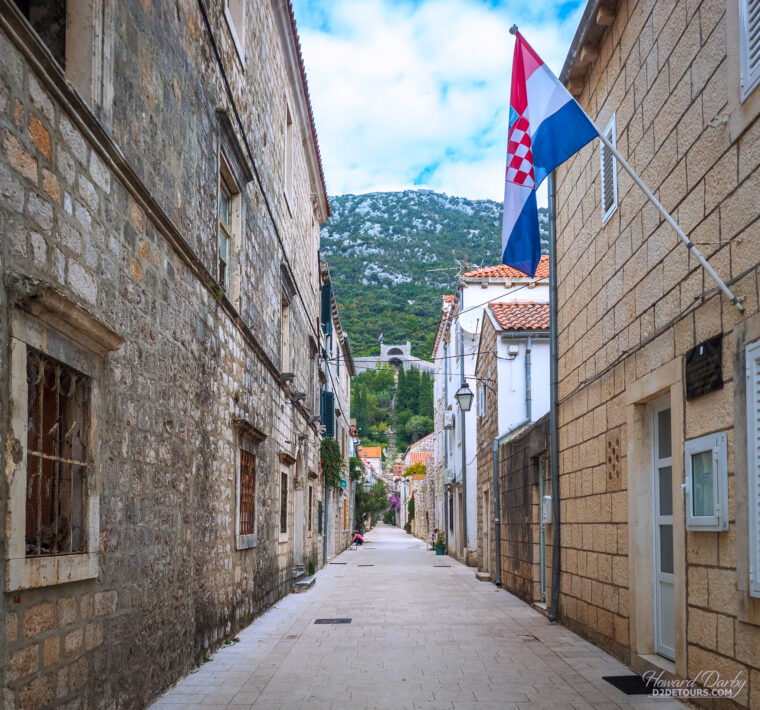 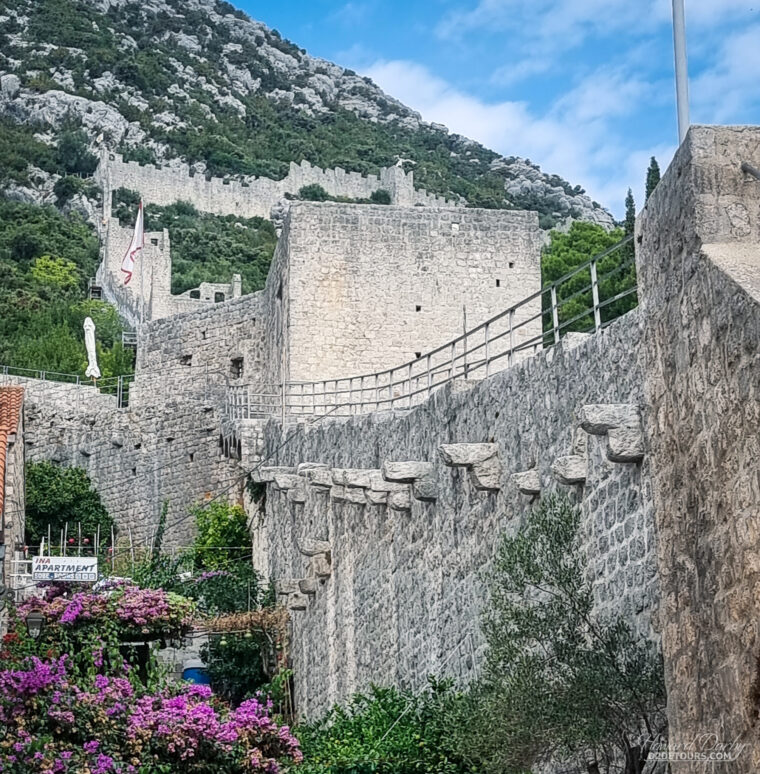 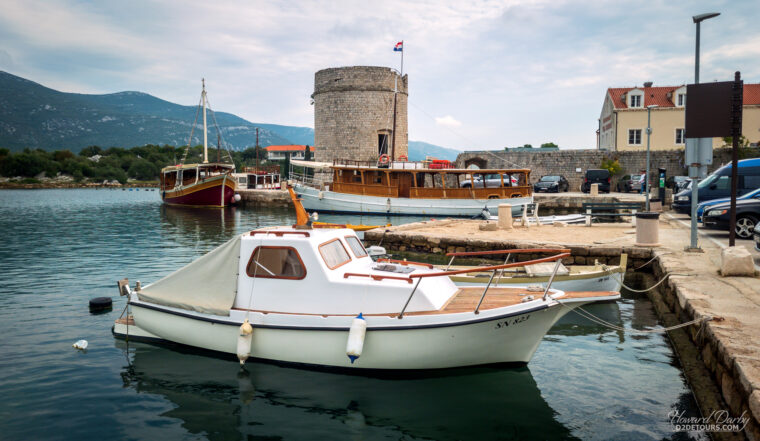 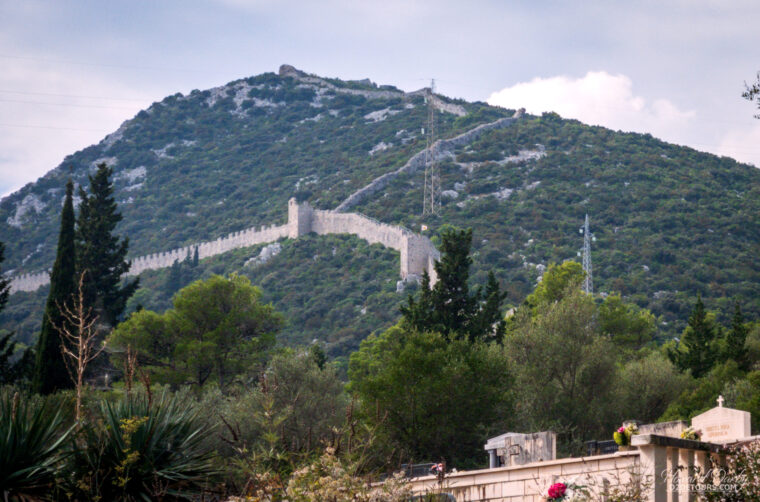 Encompassing the heel of Italy’s boot is the region of Puglia, known for centuries-old farmland and hundreds of kilometres of coastline. Rocky shorelines, windswept shrubland and ancient olive groves, it looks nothing like the Italy with which I am familiar. Visiting in mid-October, the coastal resorts were completely shuttered and many of the towns seemed almost abandoned, except for the town of Alberobello, home to the largest collection of trulli homes in Puglia – it’s a popular shore excursion for cruise ships docking in Bari or Brindisi and obviously several ships were in port on the day of our visit. A trullo is a small, round, whitewashed building topped with a conical roof made using a dry stone (mortarless) technique.

During the 15th century, every settlement was subject to taxes levied by the Kingdom of Naples. The landowner of the Alberobello region insisted his tenants build their homes using the dry stone technique so that the buildings could be characterized as temporary structures (because they did not have a “permanent” roof) and thus he would not be subject to the taxes as his buildings didn’t constitute a settlement. The town has a fairy-tale quality to it and I half expected to find gnomes lurking around the corners. Trulli are not just in Alberobello, they can be spotted all over the Puglia region, acting as temporary shelters for farmers or storage sheds. 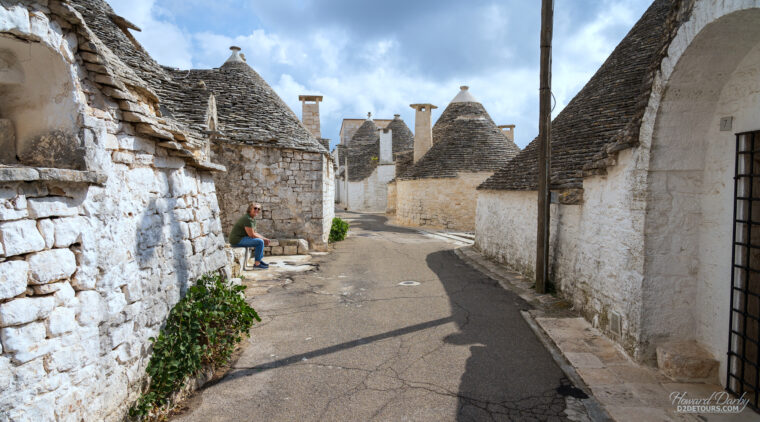 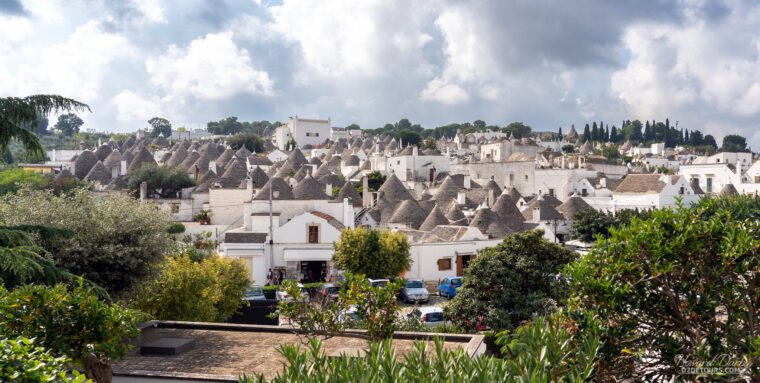 Perched on the cliffs above the Adriatic Sea is the “Pearl of the Adriatic,” the picturesque town of Polignano a Mare, full of narrow streets that all seem to lead to a spectacular view of the sea. 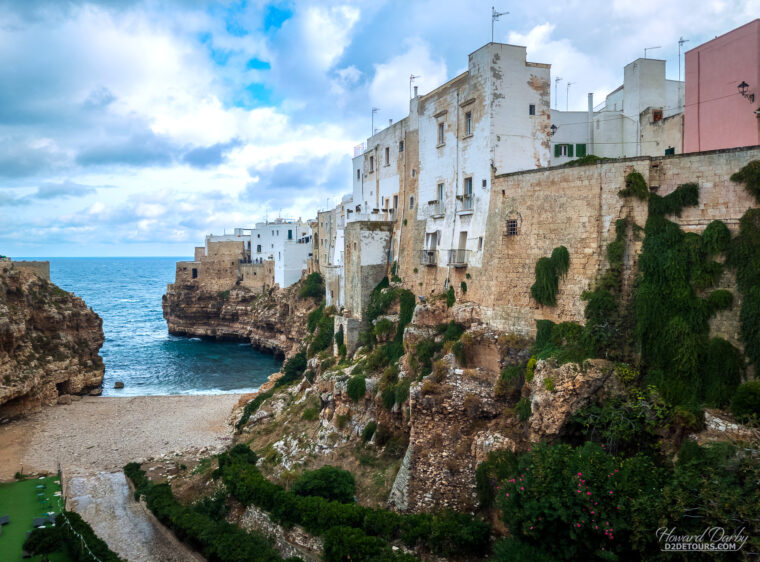 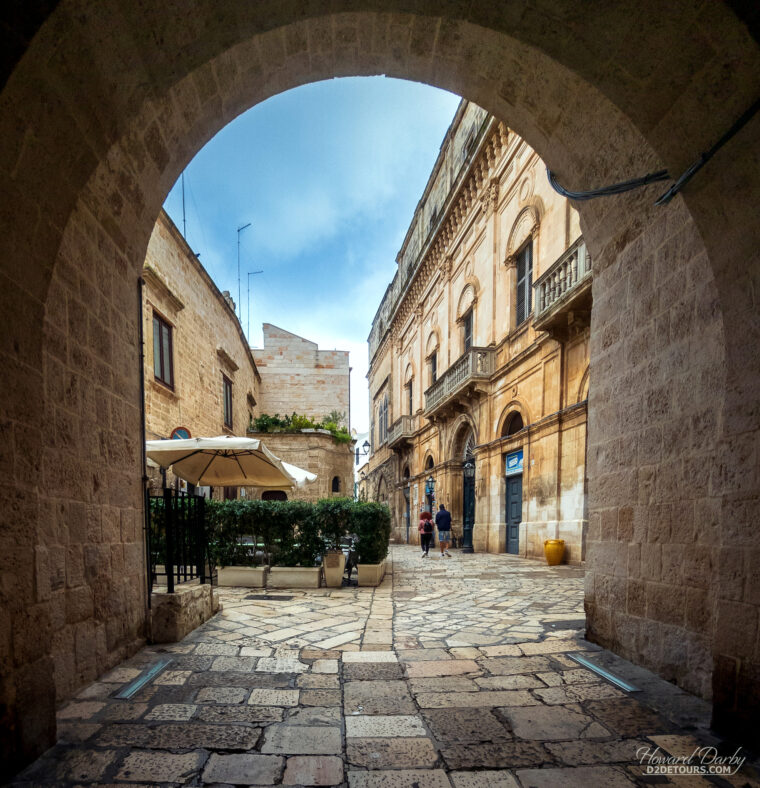 To tour Italy’s heel, we based ourselves in L’Assunta and stayed in an 18th century Masseria, a fortified farm typical to the Puglia region.

The complex has been in our host’s family for the past 150 years and he has converted the lower level of the original farmhouse into three self-contained rental units (he and his family live on the upper level). The barrel vaulted ceilings and stonewalls of the units were charming, however what made our stay here particularly unique was visiting the masseria’s ancient underground olive mill. 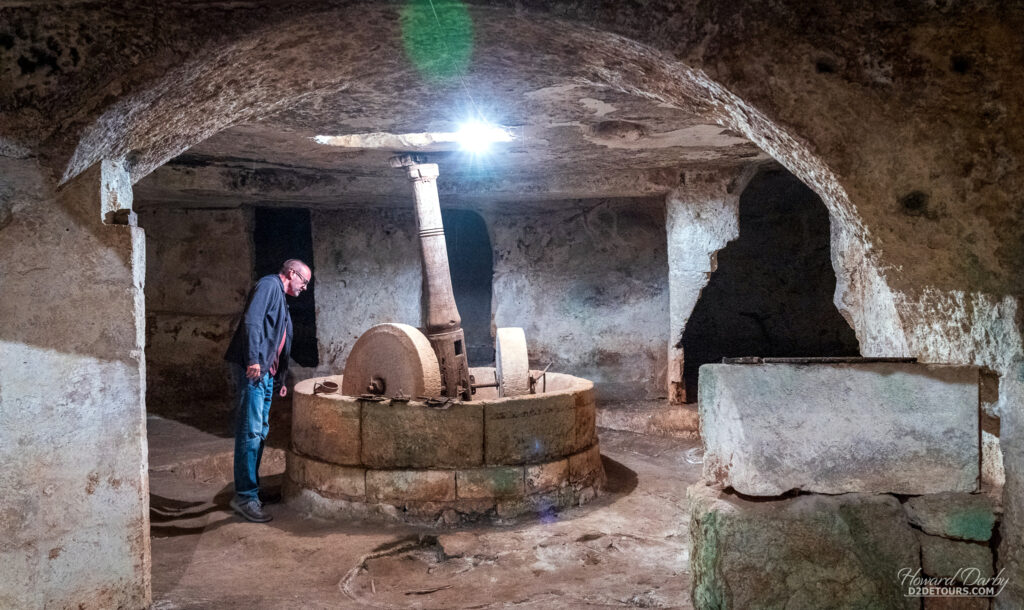 Today, the oil from Puglia is used for human consumption (and is considered some of the most “palatable [oil] in the world,” but between the 16th and 19th centuries the region produced olive oil for lamps. The oil from Puglia’s fermented olives was highly prized because it didn’t turn lamp glass black and at the height of production, in the 18th century, 26 ships per day were departing from the southwestern port in Gallipoli delivering oil to Italy and the rest of Europe. Given the value of this commodity, building mills underground served a dual purpose – protection and ensuring a constant temperature (18°C / 64°F) which kept the “green gold” flowing even during the winter months (the production season ran from November to May). Having an oil press worker in the family was a great source of pride although because of the nature of the work (security and continuous production), the workers stayed underground 24/7 during the season, often destroying their eyesight. The rooms used for the olive mill under our L’Assunta Airbnb are over a thousand years old and originally served as living space for people and their animals; they were converted to an olive mill 500 years ago. Our host would like to turn his mill into a tourist attraction for more than just his guests, except the costs are too high. Interestingly, notwithstanding its unusable state, simply having the mill on his property makes him subject to some local taxes.

We left L’Assunta heading for Reggio Calabria where we would be catching the ferry over to Sicily. While Google Maps showed the drive should only be 5 hours we have learned there is nothing quick about driving in Italy so we didn’t allow ourselves a very long stop in Matera.

In hindsight, I wished we’d spent a day or two in the city – it’s really neat.

The oldest part of Matera, the Sassi (Italian for stone) is comprised of dwellings embedded into the rock of the canyon walls. Believed to have prehistoric origins, many of the caves have been inhabited for centuries. Sadly, by the mid-twentieth century, the living conditions in the Sassi were abysmal (no running water or electricity, rampant disease due to the lack of hygiene) and the Italian government was rather embarrassed by the situation. 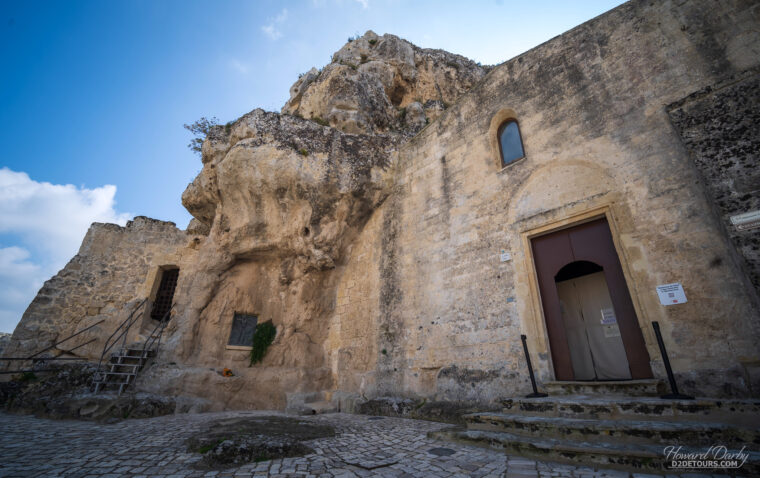 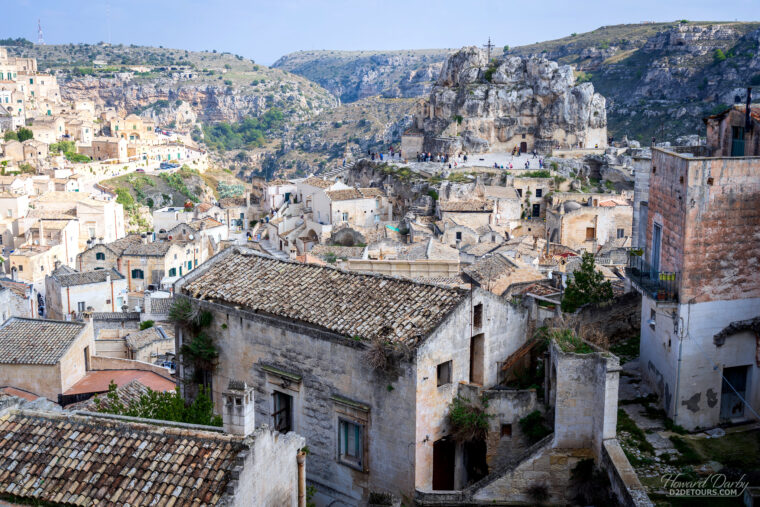 They mandated that the entire population of the Sassi be relocated into modern housing elsewhere in the city. For the most part, the area was abandoned until the 1980s when the local government saw the potential for tourist dollars and with the help of UNESCO converted it into a vibrant community complete with museums, restaurants and hotels; Matera is one of the fastest growing cities in southern Italy. 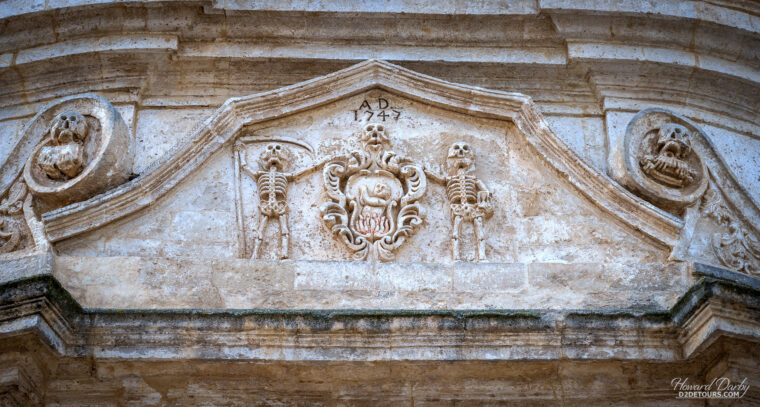 The ferry between Reggio Calabria (mainland Italy) and Messina, Sicily runs frequently throughout the day. However, if you find you need to spend a night before boarding the ferry, we were quite impressed with B&Benny in Reggio Calabria – only €47.50/night ($63 CAD). It is just a two-room B&B, with the private rooms sharing a common kitchen. The bed was comfortable, the bathroom spacious and they provided us with all the fixings for a substantial breakfast – eggs, ham, cheese, fruit, yogurt, pastries, coffee and juice.

Southern Italy isn’t nearly as touristy as the area around Rome, and the northern part of the country. Consequently, we encountered very few people who spoke English. Even so, with a few basic words, and some pantomime, we managed just fine.

Our time in Sicily and through central Italy was full of history: d2detours.com/road-trip-italy-sicily-herculaneum-orvieto/ ... See MoreSee Less

Evening on backstreet of Rovinj, Croatia

Sometimes you just have to scratch! Enjoying Tanza

Leopard up a tree